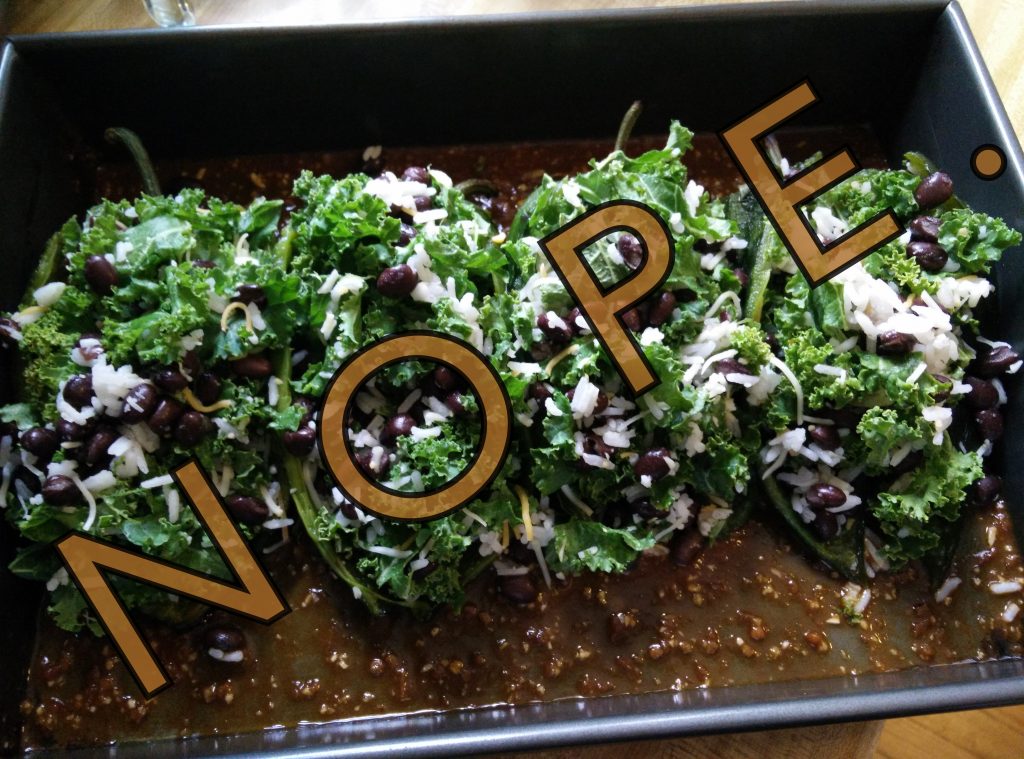 You may have noticed I didn't post anything in the last two weeks. What gives?

I actually had three recipes planned for the week before last. I normally aim for two posts a week, sometimes one, depending on my schedule. But a few Sundays ago, I made all three! The problem is nothing came out the way I wanted it to.

To give you a little insight on how I work on recipes for the blog, I do all my cooking and photo-taking on the weekends because I like to take advantage of the natural light when I can. My full-time job doesn't allow me to do all that during the week. I'm still learning how to use my DSLR and if you go back to older posts from not that long ago, it shows! I used to work on food photos at night after work, but I have a mediocre setup as far as lighting goes and my photos never turned out that great...which reminds me that I should update some photos for older blog posts soon.

Anyway, nobody's perfect, right? Sometimes you'll make something great and sometimes you'll mess it up because you either put too much of an ingredient or missed a step that turned out to be an important one. Or maybe you just have no idea what you're doing when you're coming up with something new.

I've been thinking that it'd be neat to write about failed recipes. Every so often, expect a post like this one! Half the reason I'm late on writing this (and haven't posted anything else) is because a.) I wasn't sure how I wanted to approach a post like this because I normally write about recipes (though once in a while I'll mix it up and post other kitchen-related things like this) and b.) OMG, have you seen the amount of snow Boston has been getting hit with the last few weeks? I live in a first floor walk-up; the snow bank in this photo is about 6 feet high. Massive amounts of snow = shoveling = neck pain = rest. 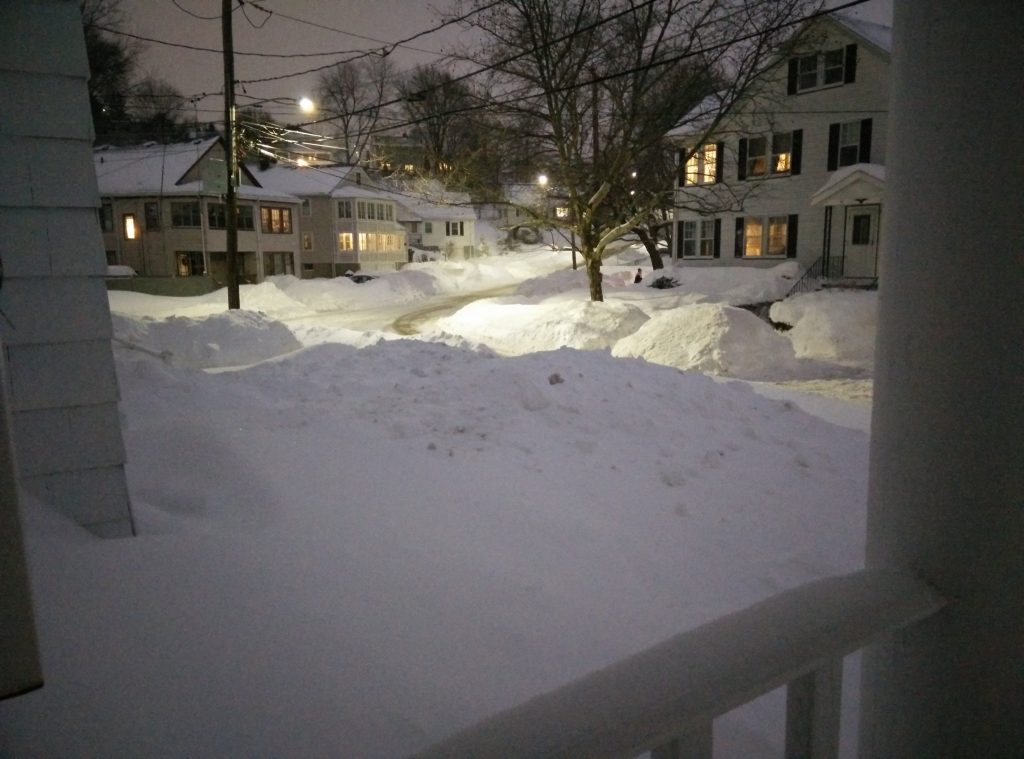 We're supposed to get more snow this weekend and I'm over here all like, WHERE'S IT GOING TO GO? Anyway.

Here are the three recipes I worked on and why none of them have been published yet. I didn't put a lot of effort into taking the bests photos for this post here, but you're okay with that, right? 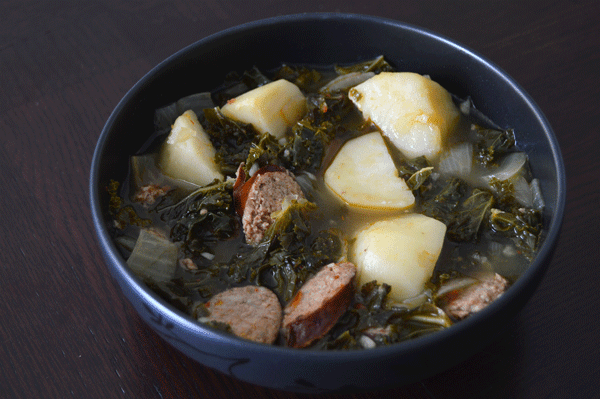 If you look at the photo, it doesn't really look terrible!  But let me tell you, it totally could have tasted better.

How'd I mess it up? I think I had two things going against me: I didn't brown the linguica or add a whole lot of salt to it. I bought the kind of meat with no added nitrites, so it was minimally processed and healthier for you than most types you'll find at the store. My original plan was to slice it up, brown it, and set it aside to saute onions; then add it back in with other ingredients to make delicious soup. Instead, I decided it might be fine to throw in with the sauteed onions for some reason. That basically just steamed the meat. And because I went with a healthier, not-as-processed package of linguica, it also lacked the amount of salt the soup needed, so each bite of the sausage was a bit bland and crumbly.

I've made this soup before, but it's been a few years. I used to make it with super-processed ingredients. You know, the stuff full of ingredients you can't pronounce that's terrible for you but makes (some) food taste good? I'll be attempting this again soon and I will not post it until I have the right balance of saltiness. No bland foods allowed!

I can't tell you how bummed I am about this one. Also, I don't have a photo for this, oops.

I recently decided I wanted to attempt a paleo-friendly BBQ sauce that was inspired by Korean BBQ sauce. The very first time I made it, I nailed it, but the amount of it was very little. I used it to braise a couple country style pork ribs. Seriously, it was so tasty, but I came up with ½ - ¾ cup of sauce, which just isn't enough for a recipe post. I’ve attempted it two times since and both turnouts were not good at all. I thought if I duplicated the recipe as is, it wouldn’t be a problem! I was so very wrong. The first redo, I put way too much ginger and lime. The second redo, too much sesame oil. The results were so gross and there was no fixing it. The sauce went straight into the trash.

I’m definitely not giving up on it yet because that first attempt was just too good; I just need to figure out how to make a decent amount and keep it just as tasty. I’m hoping I’ll be able to post it soon! Way too excited about this sauce to give up on it. 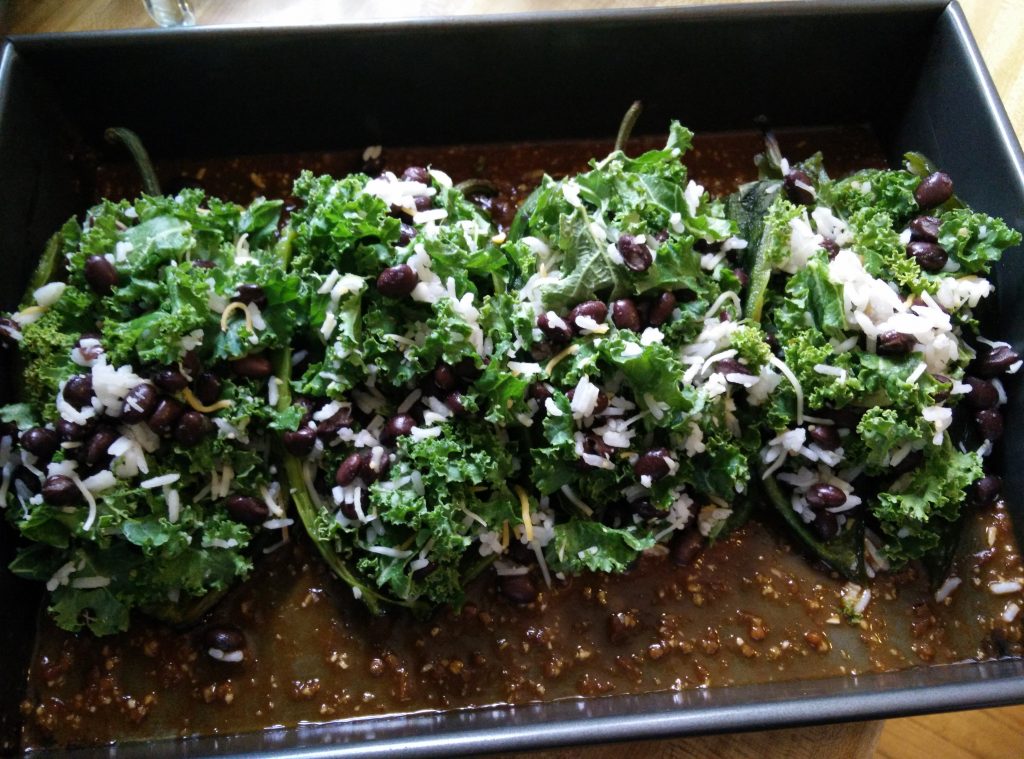 I had a few mistakes going on here. The first time I made this, it came out very tasty, but was not pretty enough to be posted - I accidentally tore up the peppers so they became more of a bed for the filling rather than stuffed with it. The second time, the peppers were (mostly) fine, but the dish itself was rather dry. I didn't use enough water for the sauce for the pan (which you can see in the photo; very little sauce!) and the biggest mistake: not adding sauce to the filling! I mean, looking at this photo and seeing the amount of kale hanging out, you can probably figure out that dish will dry out in the oven almost immediately. Well, I don't know what I was thinking.

I also used a cheap metal pan to bake them in as opposed to a Pyrex dish I normally use. Both issues caused dried up chipotle sauce caked to the pan (though if I had added more sauce to the pan in the first place, it probably wouldn't have been an issue).

The good thing is I was able to save this dish by adding sauce to it after it came out of the oven, but it didn't look appealing (I didn't think to take a photo of the final result at the time).

And there you have it! I'll think of better ways to write about failed foods in the future, but I hope you enjoyed this read! If you have any suggestions on how to make posts like this better, please comment below!