Ever have reverse-seared lamb loin chops? It's a game-changer! These chops are tender, juicy, and super flavorful, especially paired with ladolemono (Greek lemon dressing).

Updated on April 30th, 2021: New photography and improved recipe instructions (written content has stayed the same for now). Yay! See more details below the recipe, including some original photos!

There are a few things he doesn't eat, like most seafood (he'll sometimes eat light fish, but that's about it), pork, most meat on bones (seriously, wtf), and lamb. He will at least attempt to break away from his picky habits depending on the food - he ate calamari the other night and didn't completely hate it and he ate chicken wings. Meat on bones. Jason. OMG. Okay, I'm done, but anyway - don't ever expect him to touch pork. That will never ever happen. Unless you maybe offered him a lot of money to.

He will sometimes eat lamb "if he has to," but I think he'd have to be desperate. When I first met the dude way back before dating him was even a thought, he was a vegetarian, so he's come a long way since then. Every time I make lamb now, I try to shove it in his face, but he won't do it. And I just want to yell, "DON'T YOU KNOW WHAT YOU'RE MISSING?"

I came this close to doing that the other day when I made the recipe I'm sharing with you today, which is lamb loin chops with ladolemono! I mean, I was asking a lot of the guy. Not only was I trying to make him eat tasty lamb, but the chops have bones, so I was really reaching there. The good thing is there's more for me! Or I can share with friends instead. 🙂

Ladolemono (pronounced "LAH-tho-LEH-moh-noh) is a Greek dressing simply made with extra virgin olive oil and lemon juice and you whisk them together. You can add other ingredients to kick up the flavor (I add salt, pepper, Greek oregano, and dijon mustard, yum!) or if you're in a hurry, the olive oil and lemon juice is all you need. For a super literal translation that doesn't quite make sense, ladolemono is oillemon; "lado" = "ladi" = oil and "lemono" = "lemoni" = lemon. Yay, Greek lessons!

Usually, ladolemono is poured over fish and it can also be used as a vinaigrette over salad, but it also tastes good over some meat - like lamb or chicken!

Outside of the ladolemono, there's also a quick marinade for the lamb itself, which is simply a lighter olive oil, salt, pepper, and fresh garlic. I usually marinade it for about thirty minutes, but you could marinate them the night before or the morning of, making the actual cooking process even quicker to get to when you're about ready to eat at dinner time. 🙂

Serve these lamb loin chops with ladolemono over simple greens, like baby spinach, for a super quick meal or pair it with some maroulosalata and/or tourlou tourlou! Delightful and tasty all around! Aww, yeah. 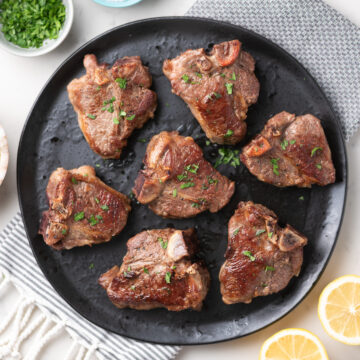 Update Notes: This post was originally published on September 27th, 2015 and was republished on April 30th, 2021 with new and improved recipe instructions and photography. The written content for this post is staying the same (temporarily), but will be updated soon to include more informative content and tips. Here are some original photos for this post!