Skordalia is a traditional Greek dip made with a potato base, lots of garlic, extra-virgin olive oil, red wine vinegar, and salt. It pairs really well with fried fish and/or vegetables. 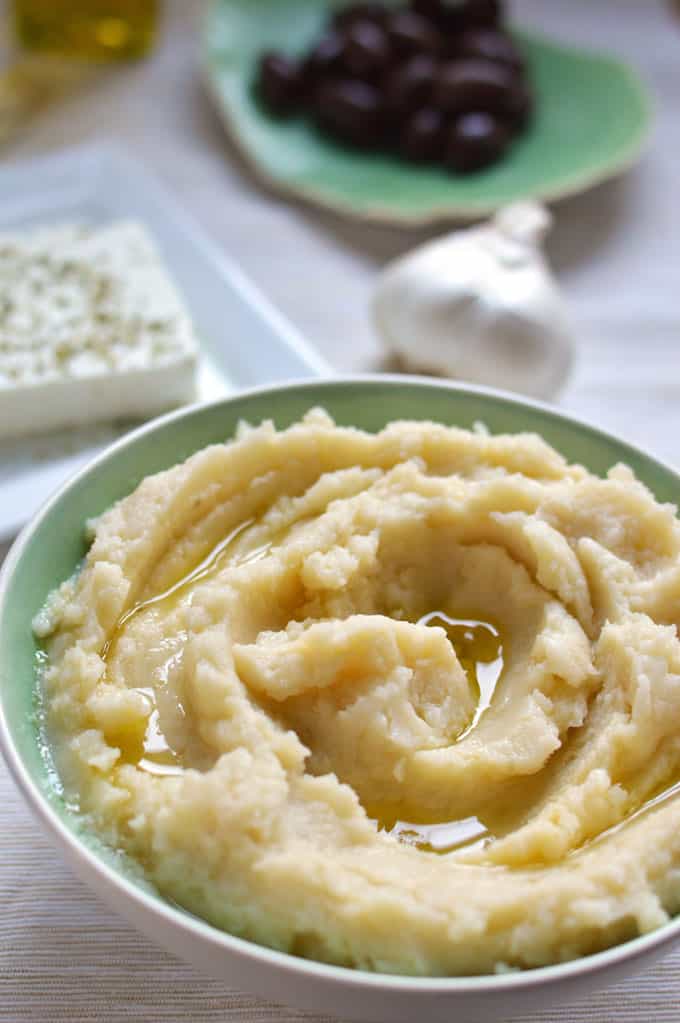 Are you planning on kissing anyone today? I'm asking because I got a delicious, garlicky treat for you and I just want to make sure you plan accordingly. I got your back.

Today, we are talking about skordalia (skor-thal-YAH)! When pronouncing it, you want to make a hard "th" sound, as if you are saying "the," but with the letter L at the end of it. Now, you try it. See? Greek is easy.

Skordalia is a Greek dip that has a few variations when it comes to the base of the dish. Some are made with potatoes (which is the recipe I'm sharing with you today), others are made with bread, almonds, or walnuts. And some variants call for a combination of the ingredients. You might be asking how a dip with a bread-base works: it's made with stale bread that has been soaked in water. I plan to explore different variations in the future, but I'm happy to share the potato one with you today!

Whether the recipe is made with potatoes, bread, nuts, or a combination, the remaining ingredients don't differ all that much. It's made with raw garlic, extra-virgin olive oil, wine vinegar, and salt; a combination that marries together so well.

I've had both the bread variant and potato; my yiayia always made it with potatoes growing up, so that is the flavor and texture I remember and enjoy the most. When I first tried skordalia, I was probably about six or seven years old and I didn't love it. I remember my dad had some as a side with some fish and I wanted to try it. It's made with a decent amount of raw, crushed garlic; maybe not a young kid's favorite. 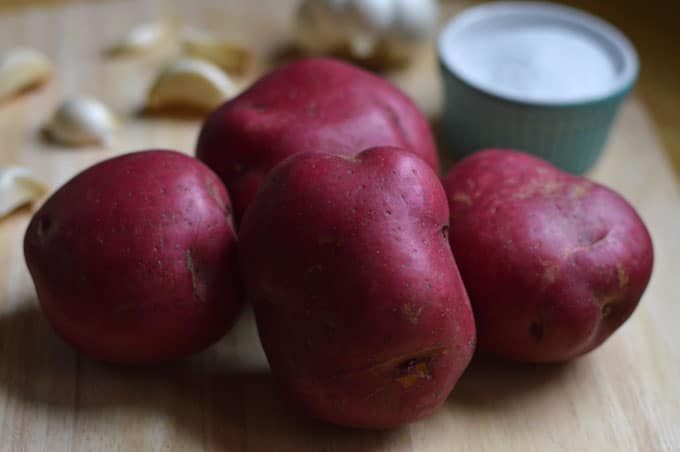 As I grew older, I acquired a taste for raw garlic and would eat a clove or two with my dad at the dinner table, usually when we had fish and horta. "You won't need the doctor if you eat your garlic," he'd say. Which, you know, isn't completely true because you should probably visit your doctor for those yearly check-ups and all, but eating raw garlic does have many benefits. Yay for garlic!

Though, not everyone is on board with eating raw garlic cloves, I know. But eating a side of skordalia with your meal or serving it as a dip for pita bread with some appetizers is a good way to get that raw garlic in your system! Once I realized I enjoyed eating raw garlic by the clove, that's when I gave skordalia another shot and I was hooked. I'd say I was twelve years old by that point and it wasn't nearly as intense as I had remembered, but thinking back to it now, I realized it had to do with personal taste. Some recipes might call for tons of garlic; the amount that would zing your mouth the way raw garlic would. Others not as much. I go for 6-8 garlic cloves for the right amount. 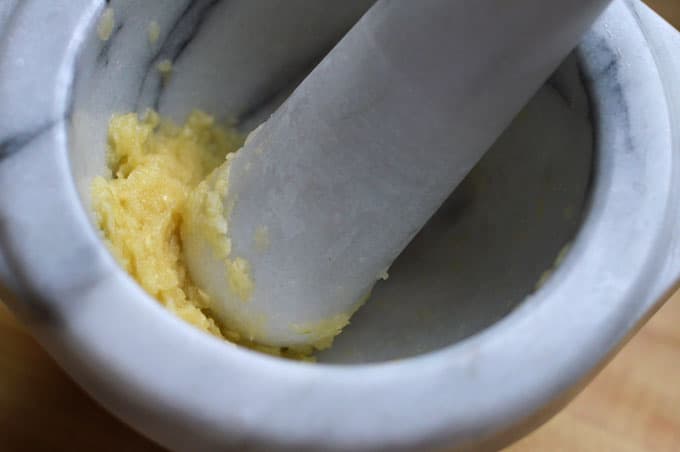 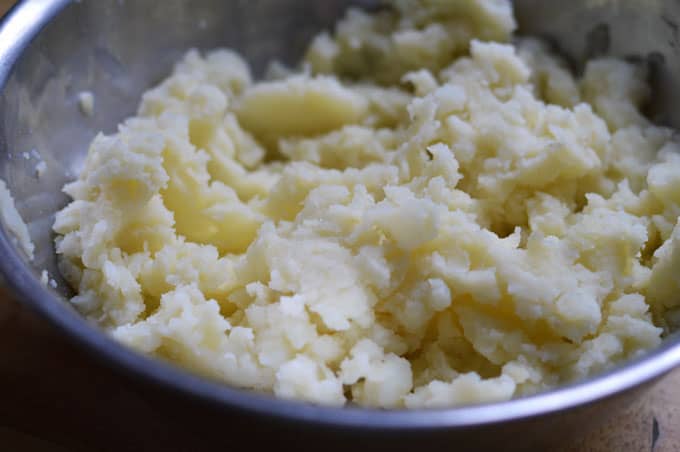 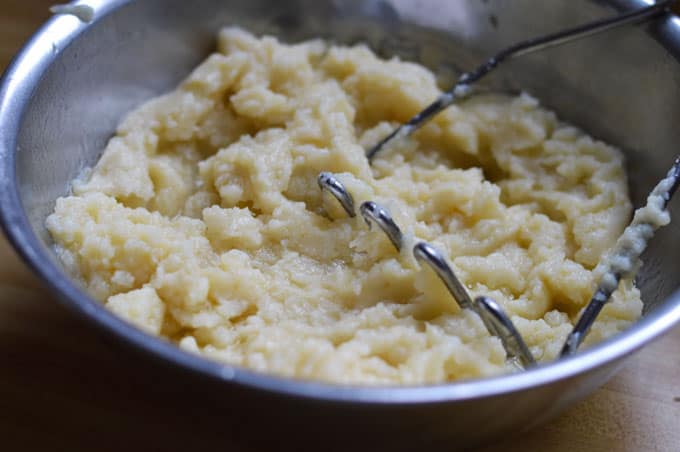 Traditionally, skordalia is made in a mortar and pestle. You boil the potatoes until fork-tender and crush garlic with some salt in the mortar until it forms into a delicious paste, followed by slowly adding potatoes to the garlic, pounding and pounding as you go. After that, you slowly add the olive oil and vinegar, alternating between the two as you continue to pound the dip and waiting before the liquids are absorbed before you add more. Don't be alarmed by the amount of olive oil going into this recipe; it's meant to have that much! This serves about 8 people.

I have a mortar and pestle, but it's not large enough make the dip in it, so I use it for the garlic crushing, then do the pounding in a larger bowl with a potato masher. If you don't have a morter and pestle, don't worry! You can use a knife to crush the garlic, by chopping it, then adding some salt and continue to chop/scrape the garlic against the cutting board until it forms into a paste. This is the method I used to do before I purchased my own mortar and pestle.

Alternately, you can use a food processor and while I own and love mine, I just love making skordalia by hand. It's a good stress reliever when it comes to all that mashing and pounding. Plus, it gives you a tiny workout on your arms. 😉

Skordalia is usually served with fried fish or fried vegetables and pairs wonderfully with both, but you can also serve it as an appetizer with some pita bread. I brought some to a friend's house on Sunday with homemade pita bread and it was a big hit! We pigged out with a bunch of delicious food and watched Star Wars. It was a rad night.

Now, go make some skordalia and eat it! Kissing someone you love with super-garlic breath afterwards is optional, of course. 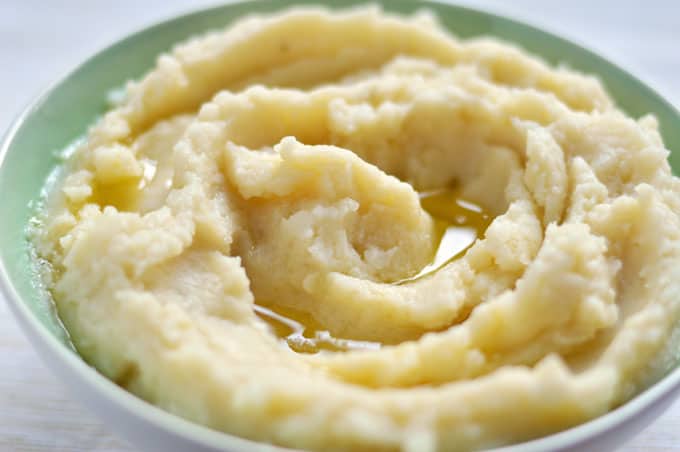 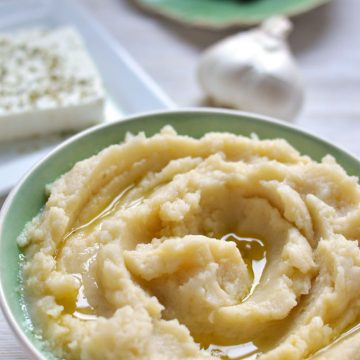 If you don't have a mortar and pestle, you can use a knife and cutting board to crush the garlic. Chop the garlic, add some salt, and continue chopping and scrape the garlic with the side of the knife against the cutting board, until a paste is formed.
Did you make this recipe?Mention @omgfoodblog and hashtag it #omgfoodblog! 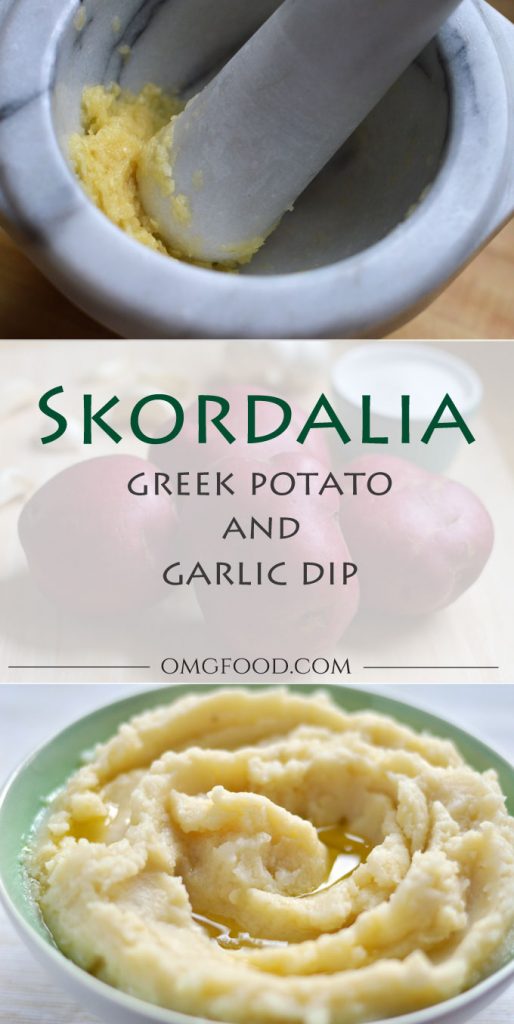