Za'atar is a blend of herbs and spices that's popular throughout the Middle East. There are many variations of za'atar, with thyme, toasted sesame seeds, sumac, and salt commonly being the staple ingredients used.

Happy Thursday to you, friends! It feels like it's been forever since I shared a new recipe. I'm glad to be back at it today! It seemed like such a mission to get here.

I took photos for this post well over a week ago and I ran into the most ridiculous issues all over the place since.

Thanks for indulging me by "listening" to my rants. You're the best. Let's move on to tastier subjects, yeah?

How To Make Za'atar

Za'atar has a small handful of ingredients that are commonly used throughout the Eastern Mediterranean and Middle East. It's generally prepared with thyme, toasted sesame seeds, salt, and sumac. Depending where you go, other ingredients can be used too. There are tons of variations and this stuff is addictive. I've made this blend at home numerous times with little changes here and there with additional herbs, ratios, etc. All of them were tasty and I've been especially into using it on roasted chicken. Now that summer is pretty much here, I'm moving onto grilling next.

In the version I'm sharing with you today, I use dried wild thyme flowers, Greek oregano, marjoram, sumac, toasted sesame seeds (which I toasted myself), and salt. It's so simple to make and it has so much flavor! It's my current obsession.

Now, I'm not going to say you absolutely have to get your hands on wild thyme, but I recommend it! Wild thyme (thymus capitatus) isn't exactly like the thyme more commonly bought at the grocery store. It's grown along mountains and valleys across the Eastern Mediterranean. The flower tops are used and have a lemon-like aroma, which pairs awesomely with the sumac. The brand I purchase is imported from Greece and I get it from Formaggio Kitchen in Cambridge (they also have an online shop). Alternately, you can buy the same brand from the Daphnis and Chloe site here. As for the sumac, if you can't find it at your regular grocery store, specialty shops should have it (Formaggio Kitchen and Penzey's both sell sumac too).

If you can't get your hands on the wild thyme, you can substitute with the thyme you keep in your own pantry at a 1:1 ratio. It won't be as fragrant or flavorful as using the wild thyme, but it will still taste great.

The first step to making za'atar is toasting the sesame seeds! Add them to a small dry skillet over medium-high heat and stir them as they toast. This will take anywhere from 3 to 6 minutes depending on the pan used and your stove. Just keep a close eye on the seeds so they don't burn. Remove them from heat when they reach a light golden color and let cool. 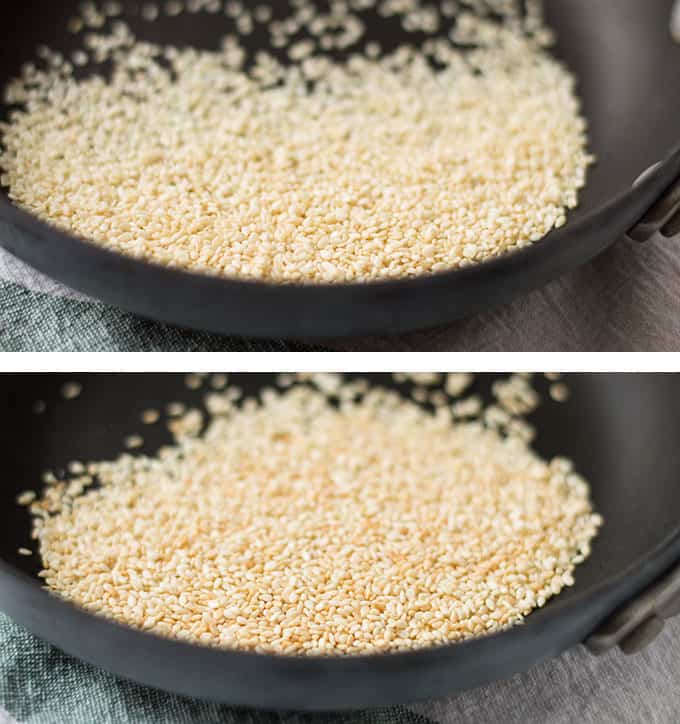 The next step is grinding up the wild thyme flowers. You can do this by crushing the thyme with a mortar and pestle or spice grinder. I have both and use them interchangeably. Below is a before and after of the thyme in a mortar. 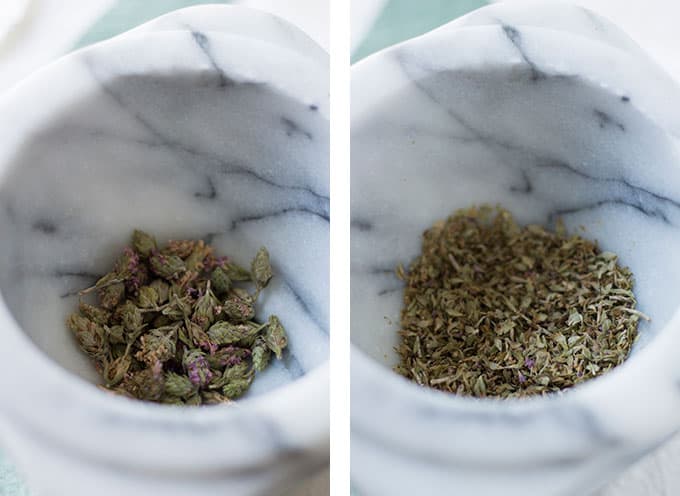 And here we have the before and after in the spice grinder. 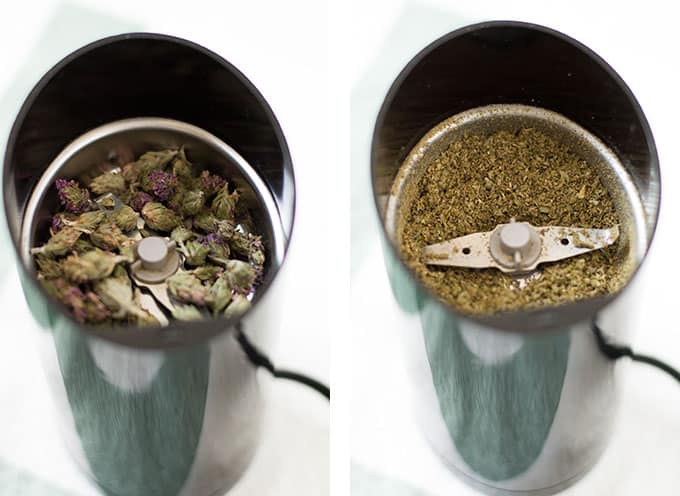 If you're using a mortar and pestle, the thyme won't become as powdery as the spice grinder, which means you will have a high chance of large coarse stems hanging out after grinding. Filter these out by using a mesh strainer and your fingers. You might find the stems in the spice grinder as well, but you won't find as many as the mortar version. 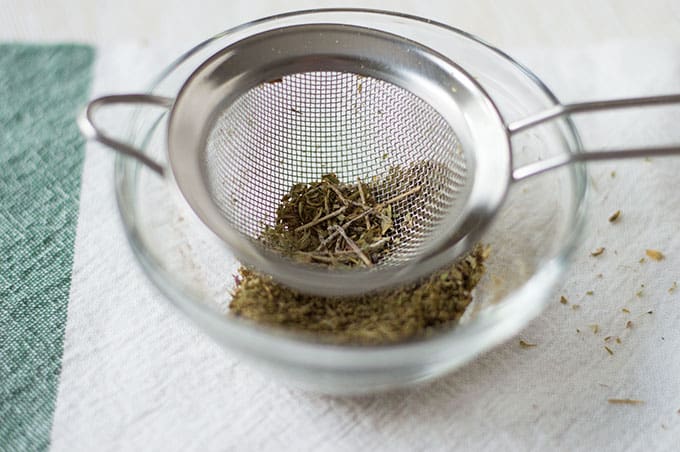 After that, combine all of the ingredients in a small bowl and stir them up. Then store in an airtight container for up to three months. Ta-da!

What to use za'atar on? So many things! Like I mentioned above, I am loving it with chicken lately. It's also great on lamb, veggies, fish, sprinkled on pita bread and baked, and more. My favorite snack with it lately is sprinkling it on labneh or Greek yogurt with some extra virgin olive oil and dipping pita bread into it. SO GOOD. 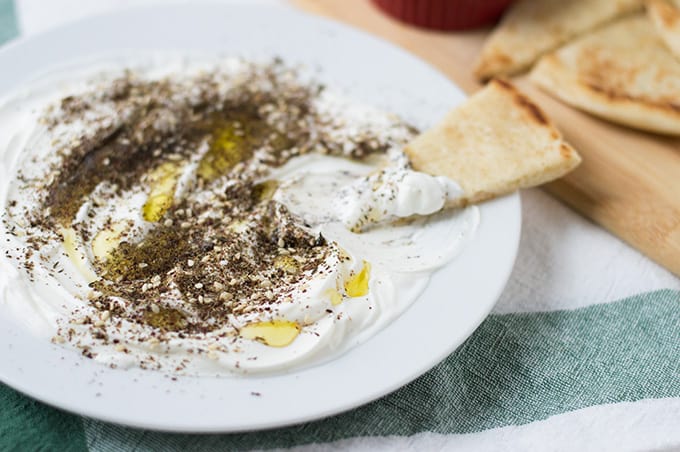 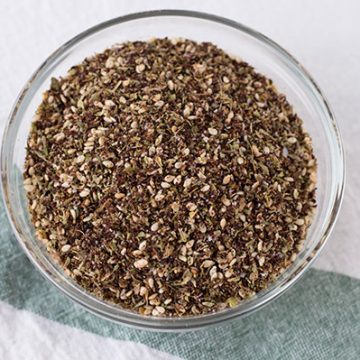 If you can't get your hands on wild thyme, "regular" dried thyme can be used. 2 tablespoons of the thyme flowers will also equal 2 tablespoons ground up thyme.
Did you make this recipe?Mention @omgfoodblog and hashtag it #omgfoodblog! 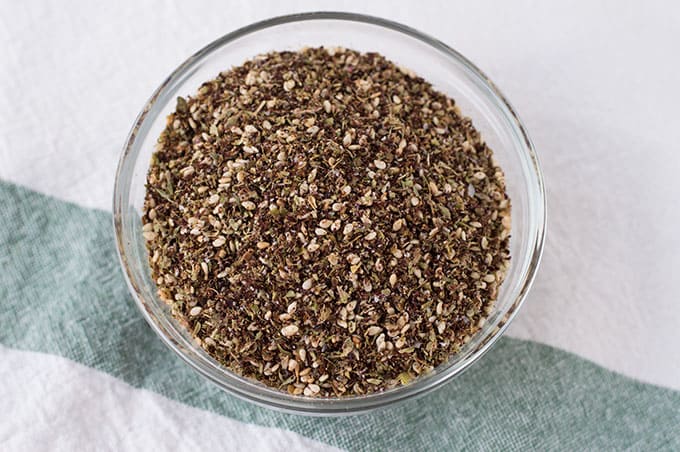